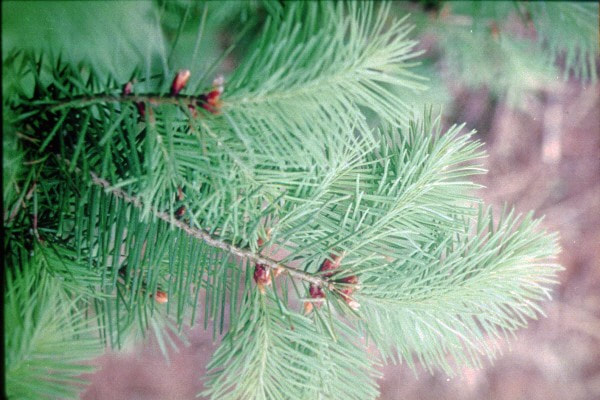 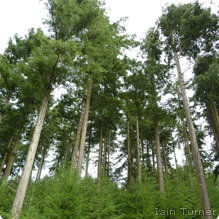 these are smaller seedlings

these are smaller seedlings

Douglas-firs are very big. They can grow from 40 to 60 feet tall and 15 to 25 feet wide. Because of this they are one of the most important lumber trees in the world.The wood is used as lumber, timbers, and plywood. The dense wood is very hard, stiff and durable.
Animals forage off the Douglas-fir in the winter or early spring when their other food supplies are covered in snow or haven't come up yet. Mule deer like it more than elk, but it is not an important food for both. Bears often scrape off the bark on young trees and eat the sap layer beneath.
The common name of the Douglas-fir is hyphenated because it isn't a true fir. It was named after David Douglas, the Scottish botanist.

Like most of its family it has a fine texture and is pyramid shaped. The trunk on older trees are free of branches. They have a short cylindrical crown with a flattened top. Needles are flat with a pointed tip. The top of the needles are bright yellowish-green with a single groove down the center; the bottom of the needles are paler. The needles appear to stand out around the twig. The cones are 1-3 inches long, turning from green to grey as they mature. Small bracts with three prongs grow between each scale. They curls up when the cone gets older, making the cone look very bristled. The bark of the Douglas-fir becomes very thick and grooved, with dark brown ridges as the tree grows older.
Native Americans had many uses for Douglas-fir. They used the wood and the branches as fuel for cooking. They also used it for fishing hooks and for handles. Douglas-fir branches were used for covering the floors of lodges and sweat lodges.
The Douglas fir is vulnerable to clay because it is a wet substance and it can rot the roots. Also the needles can get infected with fungi and this causes them to fall out.

Parts Used: The trunk is used for lumber and the leaves can be steeped for tea.